& # 39; We will never come back again & # 39; – Utah-related families plan to move to a Mexican community bereft of homicides 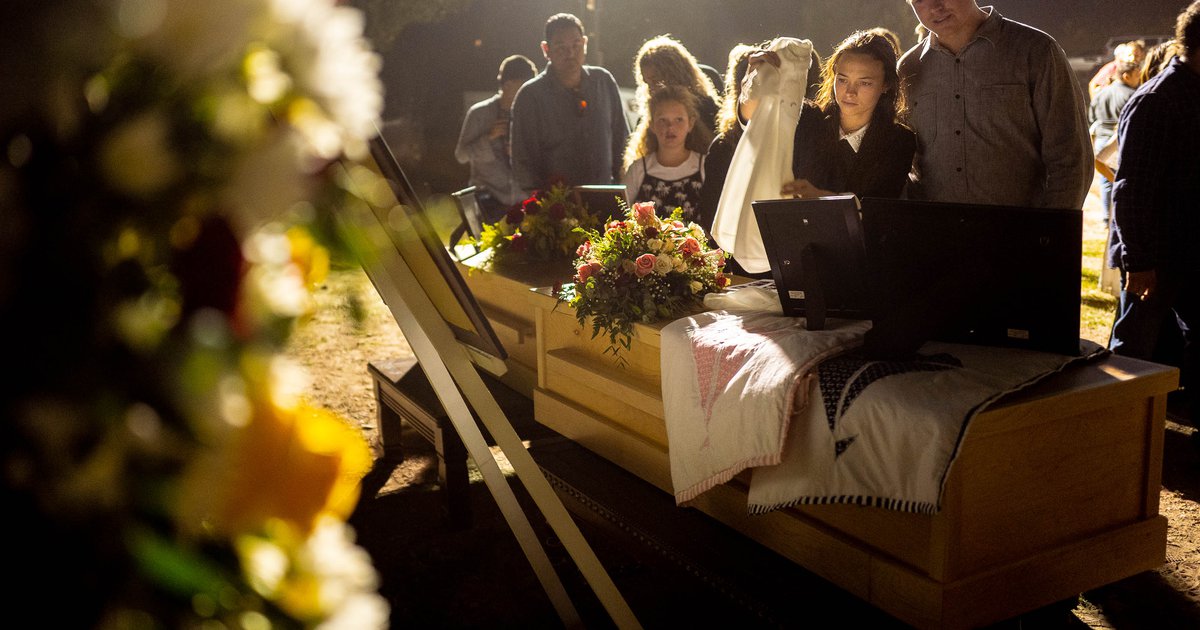 La Mora, Mexico • Sitting at his mother's kitchen table, fixing and pouring an open grenade at one of the orchards here, Ben Langford says he's done in La Mora and Mexico.

"If I could sell, I would sell," Langford said of his house and ranch. "Right now, half the families are passing by here."

Hours ago, Langford was helping the graves in the graves of his brother-in-law, Dawna Langford, and two of his children, 1

1-year-old Trevor and 2-year-old Rogan. They died in the shootings on Monday that killed three mothers and six children.

No one is sure what will happen to La Mora after the ambush, allegedly perpetrated by a drug cartel, but everyone agrees the place has changed. People who grew up here talk about a childhood romping through the brown desert hills surrounding the valley, fishing and swimming along the river past homes, and helping their families raise crops or cattle that grow nearby. [19659002] Now, they are talking about their fears.

"I do not feel safe here and I do not," David Langford, wife to Dawna Langford and father to Trevor and Rogan, said Thursday at the conclusion of comments at their funeral.

Later Thursday, Joe Darger, a polygamist from Herriman, Utah, who attended Thursday's services, tweeted that members of Dawna Langford's family were planning to move, even though they had never known where else.

Uncertainty and fear are real. Many families will leave if not forever until safety is more certain. My son in family law will be here today but Dawna's family is too traumatized to stay. I was told they were leaving now. They do not know where else

Not only resident families are leaving, but also relatives who frequently visit the plan to walk away.

"I literally do not know what will happen," Melanie Langford, another relative of some of those who died, told a community steak and named chicken after the funeral, "but I will not return until I know it's safe. "[19659011] (Trent Nelson | The Salt Lake Tribune) The creators are bringing the remains of four children dead with their mother, Maria Rhonita Miller, following their funeral in La Mora, Sonora on Thursday November 7, 2019. Howard Jacob Jr., 12; Krystal Bellaine, 10; Tito Alvin Miller, 8 months; and her twin sister, Tiana Gricel. "class =" image-lazy “/>

He lived in La Mora for two years and now lives in Williston, N.D., with his wife and three children. A few steps away, Jeff Jessop, 19, of Hildale, Utah, did just fine. In July, Jessop married one of David Langford's daughters in the same yard where the father offered funeral benediction for his wife and two children.

"We will never come back here," Jessop said. "This is the largest gathering ever to come here again."

The red-haired Jessop is in great mourning. After all, she hopes to have children who will one day want to know where their mother came from, she said, and she won't take them there.

La Mora, a community of about 150 permanent residents, is relatively young – about 60 years old. But it traces the history of what happened in Utah and The Church of Jesus Christ of Latter-day Saints more than a century ago.

Some residents and their friends have made history by explaining what is happening now and why the community can't tolerate the dangers posed by drug cartel fighters.

Most residents of La Mora are called fundamentalist Mormons who emphasize the original teachings of church founder Joseph Smith. A handful, including David Langford (Dawna is his second wife), are still practicing polygamy. Others still believe it. After the mainstream LDS Church officially abandoned polygamy in 1890, some members moved to Mexico to continue the marriage ceremony.

Utah has made polygamy a felony, a fact taught by Enoch Foster, who lives with his three wives in Rockland Ranch in southeastern Utah and has family ties to La Mora. He described the residents of La Mora and neighboring Colonia LeBaron in Chihuahua as examples of people who had to flee to practice their religion.

"Mexican fundamentalists should not be there," Foster said in a telephone interview. .

Back to the kitchen table in La Mora, Marilyn Langford, Ben's mother. , is discussing that cartels appear to have killed nine women and children in some effort to secure the territo ry and eventually money.

"They have not driven us away [for our religion]," he said.

Ben Langford responds that the current danger appears similar to what happened to residents in northern Mexico – including the Saints -day Saint polygamists who were back then in good standing with the Salt Lake City-based church – in during the Mexican Revolution in the early 20th century. The flow of political turmoil has pushed many back into the southwestern United States for a time.

La Mora full-time residents live in modern, often large houses and are richer than the average Mexico. The community has a president – equivalent to a mayor – but little other municipal infrastructure. There are livestock branches, orchards and alfalfa farms but few businesses.

Almost everyone born here has citizenship in Mexico and the United States. Most people call La Mora housework in the U.S., at least for a few years. Ben Langford, his wife and their 11 children, the youngest born two weeks ago, have lived most of the year in Gilbert, Ariz., Where he works in construction framing.

Melanie Langford's husband works for one of two oil farm services companies established by families from La Mora in Williston, ND Father, mothers, children, siblings and cousins ​​from La Mora and Colonia LeBaron who is part of Williston's oil refinery and delivers supplies and services that will help the economy of North Dakota. 19659002] For residents with careers in the United States, it would be easier to leave La Mora and never return, Ben Langford said. He estimates his home and ranch here each cost $ 200,000 – or until Monday.

That's not enough to keep him in Mexico.

His brother David Langford is an example of a man who could have more financial losses. Ben said his brother has "millions" of US dollars invested in pecan orchards around La Mora.

Another factor is also possible for La Mora residents to bolt. Unlike Colonia LeBaron, few La Mora residents marry local Mexicans, said Jacob LeBaron, a brother to Dawna Langford. Almost all of La Mora's marriages are from other U.S. citizens in Mexico or fundamentalist Mormons in the United States.

Members of the Langford family have also expressed concern hope that Mexican President Andrés Manuel López Obrador will accept an offer from President Donald Trump to fight the cartels. La Mora residents – a number of Trump supporters – have been frustrated by the Mexican government for not reducing violence in the country and for refusing to allow citizens to have guns as Americans can.

"The irony is: We live in a country that takes away our weapons," David Langford said at Thursday's funeral, "and we cannot protect ourselves."

Mike Hafen, another of the brothers Ben and David Langford, said there were other killings in The Mexico that did not receive media attention in both countries that resulted in the killing of nine U.S. citizens.

"If this happened to a Mexican family," Hafen said, "No one would hear anything." 19659002] Around the table, Hafen and Ben and Marilyn Langford also talked about how cruel the killings were on Monday. They discussed the tactics the killers could have used to get people out of a car, and then the second and third, and what they heard made ammunition to the bodies.

They mentioned how it turned out that it was not the flames that ignited the SUV Rhonita Miller was driving with four of her children, 12-year-old Howard "Howie" Miller Jr., 10. Krystal and 8-month-old twins Titus and Tiana.

Guns certainly know they fired at women and children in two other vehicles – one carrying Dawna Langford and nine of her 13 children and one second carrying Christina Marie Langford Johnson, who also died in the attack, and his 7-month-old daughter, Faith Marie, survived.

Under a canyon road, travelers in trucks behind the caravan looked up. They wonder – and worry – about the men standing on the ridge. Who are they? They became news photographers who stopped taking photos from the area where gunshots fired on Dawna Langford and Christina Johnson's SUVs.