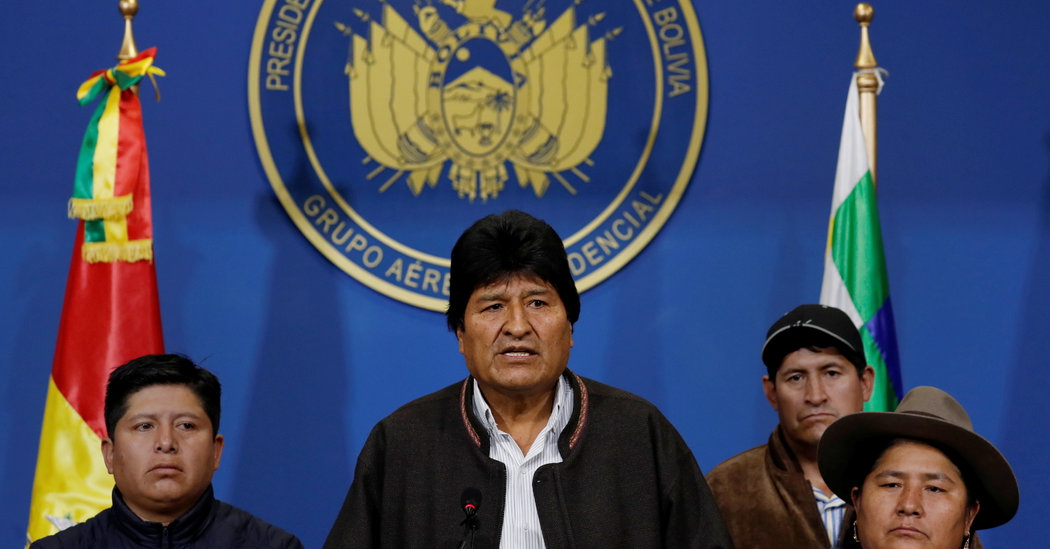 President Evo Morales of Bolivia, in power over a decade ago, resigned on Sunday after unrelated protests by a disgusted population accusing him of slowing democracy and expanding his management. Morales and his vice president Álvaro García Linera, who also resigned, said their departure was an effort to stop the bloodshed that had spread across the country in recent weeks. But they did not admit that nothing was wrong.

Mr. Morales was previously extensive, and has held the presidency longer than any other current head of state in Latin America. He was the first indigenous president of a country led by a tiny elite of European retreat for centuries, and he watched over Bolivia through a period of economic growth and recession inequality, won support from Bolivians who saw him as their first true representative in the capital.

"I want to tell you, brothers, that the fight will not end here," Mr. Morales said in a television interview Sunday. "The poor, the social movements, will continue this fight for equality and peace."

"It hurts too much," he added.

Mr. Morales's reluctance to give power – first bowing to the country's laws to stand for a fourth election, then asserting he won despite widespread concerns about fraud – left him surrounded by protests, that were abandoned by allies and not counting the police and the armed forces, who cooperated with the protesters and demanded his resignation.

As the country slipped into more serious chaos over the weekend, protesters expressed their fear of Bolivia's trajectory under Mr. Morales.

"This is not Cuba, this is not Venezuela!" They heard in La Paz, Bolivia's main city, over the weekend. "This is Bolivia, and Bolivia is respected."

Morales' departure is a key step in the spasms of unrest that has roiled Latin America in recent months. Many regional leaders have slept through street protests, acts of slander and deepening political polarization – dynamic killed by underperforming economies and rising resentment inequality., when a smattering of small police units made dramatic declarations that they were separating from the government and joining protesters outraged suspicions The October 20 election was rigged.

Officials in La Paz were among the first to join the uprising. Initially, many went to the streets with scarves or scarves. I had a mask covering their faces, seemingly afraid to meet. But as their ranks grew, many dropped masks and used bullhorns to meet protesters.

"Our duty has always been to protect people," a female official said through tears on a television screen. "The police are with the people!"

When Bolivians went to the polls in October, many expressed their hope that the president would suffer the first election loss since the landslide victory in 2005. Graffiti's messages submitting to G. Morales as a “dictator.” Has a lot in the capital.

The opposition felt successful when initial results showed that Mr. Morales had to face former President Carlos Mesa in a runoff, failing to carve a 10-percent point margin needed for to a correct win.

That situation could be jeopardized by Mr. Morales because other opposition candidates have been endorsed by Mr. Mesa.

Without explaining why, election officials stopped issuing vote count information for 24 hours. The night after the election, they announced a stunning update: Mr. Morales won, with enough votes to avoid a second round. Angry mobs raided election buildings around the country, burning some.

In the days that followed, large-scale demonstrations and strikes paralyzed most of the country. Mr. Morales defended his election victory as reasonable and called on supporters to take to the streets in a show of force. Many, including bands that make up the people protesting the government.

But on Sunday, the African American Organization, which oversees the October 20 election, released a preliminary report outlining the irregularities and said the vote should be revoked.

On the same day, Mr. Morales called for a new election, in a rare concession in the face of public anger and mounting evidence of electoral fraud – but it appeared to achieve little.

Not happy, demonstrators and opposition leaders have confirmed that Mr. Morales has stopped. "Sir. Evo has broken the constitutional mandate – he has to leave," said Luis Fernando Camacho, one of the main leaders of the protest.

The president's power appeared more and more weak as the day passed.

Many leading figures in his party have resigned, and the military has launched operations that appear to protect protesters from violent bands of Morales supporters who have killed dozens of protesters and injured scores.

Mr. Mesa, the former president who came in second in the disputed elections, said the country's political parties should gather and organize a new vote. He slammed the president and the vice president on Sunday for "this fraud, and the social unrest that has led to the deaths and hundreds of people injured."

Michael Kozak, the top diplomat in the State Department who oversees Latin America policy, has endorsed the call for a new election. "All influential processes must come down," he wrote on Twitter .

The groundswell of anger became intact before the first vote was cast. Many Bolivians see President Morales's fourth bid as the country's top democratic norm.

In 2016, Mr. Morales sought to leave voters to the two-term limit established in the 2009 Constitution, which was drafted and approved in the first term by the president. Voters strongly rejected the proposal in a referendum – which, under Bolivian law, must be binding.

But Mr. Morales found a workaround. The Constitutional Court, packed with its loyalists, held the restrictive terms compelled by human rights, giving Mr. Morales the right to run for office indefinitely.

As he campaigned this year, Mr. Morales told Brazilian journalist Silvia Colombo that he believed his country needed him at the helm – perhaps without having to stay in power.

"I don't know what I would do if I were not president," said Mr. Morales, who maintains a work schedule penalty that begins before dawn and most days includes of flights to the remote corners of his hometown. "Bolivia is my life and my family."

Mr. Morales, a member of the Aymara Indigenous people, rose to prominence as head of the union for coca growers. His trajectory in the capital is a moment of transformation for a country where indigenous people are suffering years of abuse and discrimination.

In his view, the country's power structure was elevated. Women now hold nearly half of the seats in Congress, and Native people hold more than ever before. political patronage. One of the poorest countries in the world, Bolivia has used natural gas exports to turbocharge its economy.

His party, the Movement for Socialism, has long been the dominant political force of the country, controlling both houses of Congress. Opponents struggle to compete with Mr. Morales because of his overwhelming support, but they also face tremendous risk. Mr. Morales released allies in the judiciary against political rivals, many of whom went to jail or were lost to captivity.

Raúl L. Madrid, a professor of government and Latin American politics at the University of Texas at Austin studying Bolivia nearby, said Mr. Morales felt the need was great.

"I think he considers himself the savior of Bolivia, as representative of the marginalized people of Bolivia, especially the Native people," he said.

Mr. Madrid says that if Mr. Morales goes down after his second or third term, he will walk away with a respectable legacy. However, he added, the president's decision to try to stay in power was futile.

"From the beginning, he was not interested in nurturing a successor that might have threatened him from within," Mr. Madrid said. "The leaders of this population trying to hold power at all costs are wiping out their legacy, and people remember them as dictators or would-be dictators."