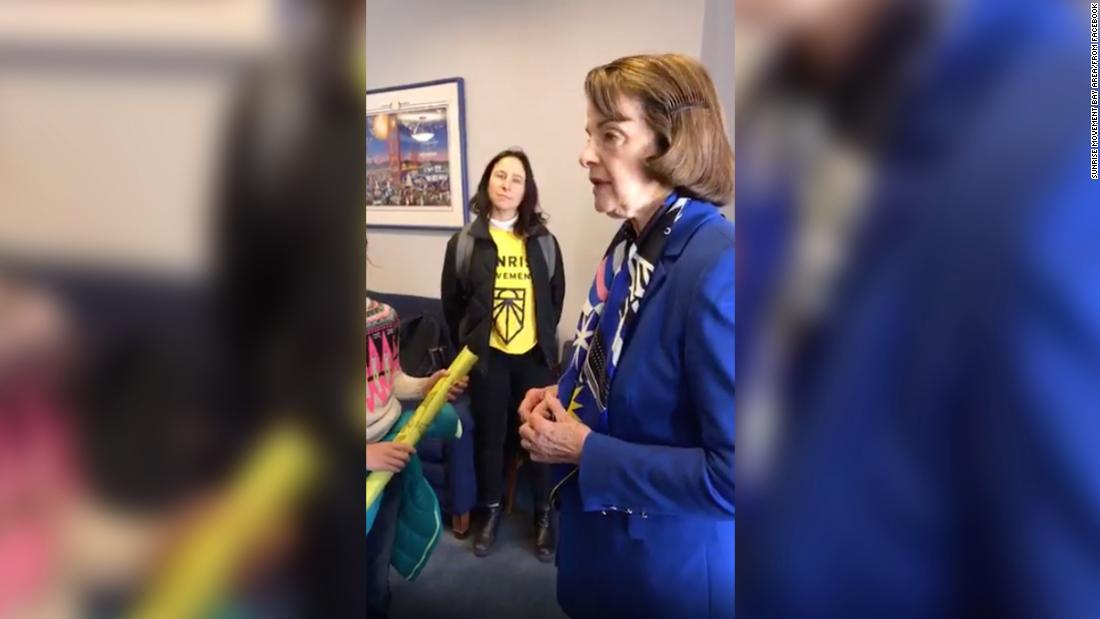 The exchange comes as moderate Democrats grapple with the Green New Deal, a 10-year plan to mitigate climate change championed by progressives such as Rep. Alexandria Ocasio-Cortez of New York.
In a video posted on Facebook by the Sunrise Movement, a youth climate-change advocacy group, more than a dozen children and several adults meet with the senator to present her a letter they wrote and ask her to vote yes on the deal. The California Democrat argues that the policy is unworkable and says she does not agree with it.

" That resolution will not pass the Senate, and you can take that back to whoever sent you here, "she says, citing that the deal does not have a single Republican in favor of the proposal and "the key to good legislation is to tailor something that you write so that it can pass, and you can get a step ahead."

When a girl urges her to vote yes anyway , Feinstein replies, "I may do that … but it's not a good resolution."

In a statement Friday night about the confrontation, Feinstein said she "always welcomes the opportunity to hear from Californians who feel passionately about this issue and it remains a top priority of mine. "

" Unfortunately, it was a brief meeting but I want the children to know the y were heard loud and clear. I have been and remain committed to doing everything I can to enact real, meaningful climate change legislation, "Feinstein said.

" We had a spirited discussion and I presented the group with my draft resolution that provides specific responses to the climate change crisis, which I plan to introduce soon. "

The conversation at times grew heated, especially when Feinstein dismissed the group's request due to their tone and their youth.

A young woman tells Feinstein she's" looking at the faces of the people who will be living with these consequences "of climate change.

" I've gotten elected. I just ran, "she continues." I was elected by almost a million-vote plurality, and I know what I'm doing. So, you know, maybe people should listen a little bit. "

In the video, Feinstein also asks a girl how old she is as the girl says politicians should listen to the people they represent. "1

9659005" Later, a young woman stresses the need for a climate plan with "bold, transformative action," and Feinstein replies, "Well, you know better than I do. "

" So I think one day you should run for the Senate, and then you do it your way. But in the meantime, I just won a big election, "the senator adds.

When Feinstein tries to conclude the meeting, a woman says the children" have decades of life that they hope to still have, and your leadership is so beautifully, beautifully possible, "the senator replies," That does not work with me, thank you. "

A woman urges the children to read the letter loudly.

Once most of the children exit, some women stay and calmly chat with Feinstein. One of them says voting to support the deal is important even though it "is not something that's aimed at passing right now" and the 16-year-old inquires about internship opportunities in Feinstein's office.