He Said He Killed Over Anti-Gay Bullying. He Was Sentenced to 14 Years. 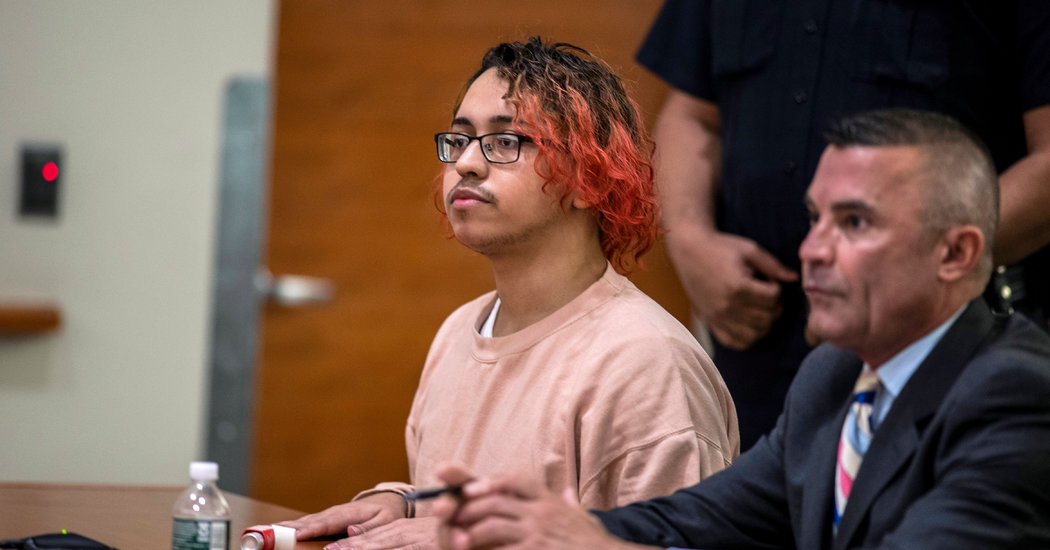 [Whatyouneedtoknowtostarttheday: Get New York Today in your inbox .]

Lacey Providence vividly remembers the day two years ago that a pair of detectives at a hospital in the Bronx told her that her 15-year-old nephew had “succumbed” to injuries after being stabbed in school by a teenage classmate.

She remembers her sister collapsing and her nephew, in shock, dropping a container of Tic Tacs. She said she could still hear the sobs and shouts from family members imploring God to bring back her nephew, Matthew McCree.

Also indelible, she said in the State Supreme Court in the Bronx on Tuesday, is the memory of Matthew's body being rolled into a room on a gurney.

“Matthew's lifeless body was drenched in blood with a cut so deep I could see his ribs,” Ms. Providence told the court, her voice breaking.

Ms. Providence spoke before Abel Cedeno, a then-18-year-old student at the Urban Assembly School for Wildlife Conservation in the Bronx, was sentenced to 14 years in prison for fatally stabbing Matthew and grievously injuring another student, Ariane Laboy, in September 2017.

The fatal attack was the first in a New York City school in more than 20 years. It drew heightened attention because of the circumstances surrounding it. Mr. Cedeno said he had suffered years of physical and emotional abuse because he was gay and then lashed out in self-defense against students who had been afflicting him.

Justice Michael A. Gross of the State Supreme Court in the Bronx rejected that defense in July after a bench trial and found Mr. Cedeno guilty of first-degree manslaughter, first-degree assault and criminal possession of a weapon.

On Tuesday, Justice Gross declined to grant a request by defense lawyers that their client was treated as a youthful offender, saying that a history of being bullied could not be seen as a "license for murderous rage."

Mr. Cedeno, wearing a pinkish shirt and with his hair dyed red, sat impassively through Ms. Providence’s statement and the sentencing.

In a statement on Tuesday, Darcel D. Clark, the Bronx district attorney, said: “There was no evidence at trial that Matthew McCree or Ariane Laboy had ever bullied the defendant. His explosion of rage has left so many lives in ruins, including his own. ”

After the fatal stabbing, Mr. Cedeno’s case became something of a cause célèbre. Some gay rights advocates rallied to his defense, seeing him as emblematic of young people who are abused because of their sexuality. Members of the L.G.B.T.Q. community argued that the school should have taken action against those who had bullied a gay student.

Mr. Cedeno was represented at no charge by two gay lawyers, Christopher R. Lynn and Robert J. Feldman, who said the proceedings were a “gay pride trial.”

Mr. Cedeno also had the support of several elected officials, including City Councilman Rubén Díaz Sr., who has been criticized for making homophobic remarks but helped Mr. Cedeno post bail soon after he was charged. Mr. Díaz also wrote a letter to the judge urging leniency in the sentencing of Mr. Cedeno, who lives in his district in the Bronx.

It emerged during the trial that Mr. Cedeno had bought an illegal switchblade online for $ 44.89. He testified that he obtained it for protection after years of abuse. On that day in 2017, after students threw crumpled pieces of paper and broken pencils that he thought were meant for him, he said, he flicked it open, then waited in a defensive posture, with the blade extended.

Other students who testified that Mr. Cedeno started the fight and that he was the one who had used homophobic slurs. The lead prosecutor, Nancy Borko, told Justice Gross that Mr. Cedeno had practiced with the switchblade and was looking for a fight with “his trusty new knife.”

Mr. Laboy’s mother, Felicia Laboy, also addressed the court on Tuesday, telling Justice Gross that although she was the “more fortunate of the two mothers,” the attack by Mr. Cedeno had "devastated my son and deeply affected my family."

"He lost his best friend, his childhood, his joyful nature," she said, adding that Mr. Laboy is now home-schooled because his hand was injured so badly that he cannot hold a pen.

that Mr. Cedeno’s conduct had been “intentional and violent” and that he had shown little remorse while trying to minimize his actions. She asked Justice Gross to sentence Mr. Cedeno to 30 years in prison, partly as a way to bring justice to the families of his victims.

"There is no pain equal to that of a mother who has lost her child to unexpected violence," she told the judge. “The order of the universe is reversed.”

Mr. Lynn countered that Mr. Cedeno had accepted responsibility for his actions and urged the judge to consider mitigating factors in his sentence. Mr. Cedeno had no previous criminal history, Mr. Lynn said, it was not a danger to anyone, it was not likely to become a danger and had garnered letters of support from prominent people who believed that he could go on to lead a productive life.

Mr. Cedeno addressed the court in a halting voice, pausing as he told Justice Gross that he was not the same person he had been two years earlier and that he regretted the pain he had visited upon others.

“I know that I was the one who brought in a knife, ”he said, adding:“ I wish I could take it all back. ”

Justice Gross said he believed that Mr. Cedeno had been bullied but noted that he had testified that he had not really known his victims and that they had not tormented him. He added that on the day of the stabbings, he had issued an "obscenity-laced invitation" to fight.

Matthew "died within minutes on the floor of that classroom," Justice Gross said. "With his passing died a future of boundless dreams."

A few moments later, Mr. Cedeno rose unsteadily to his feet and was handcuffed before being taken from the courtroom. From the left side of the gallery, faces stared at him. On the right side, some people raised a hand.

"We love you, baby," called one supporter, as Mr. Cedeno appeared to nod in acknowledgment before being escorted away by court officers.