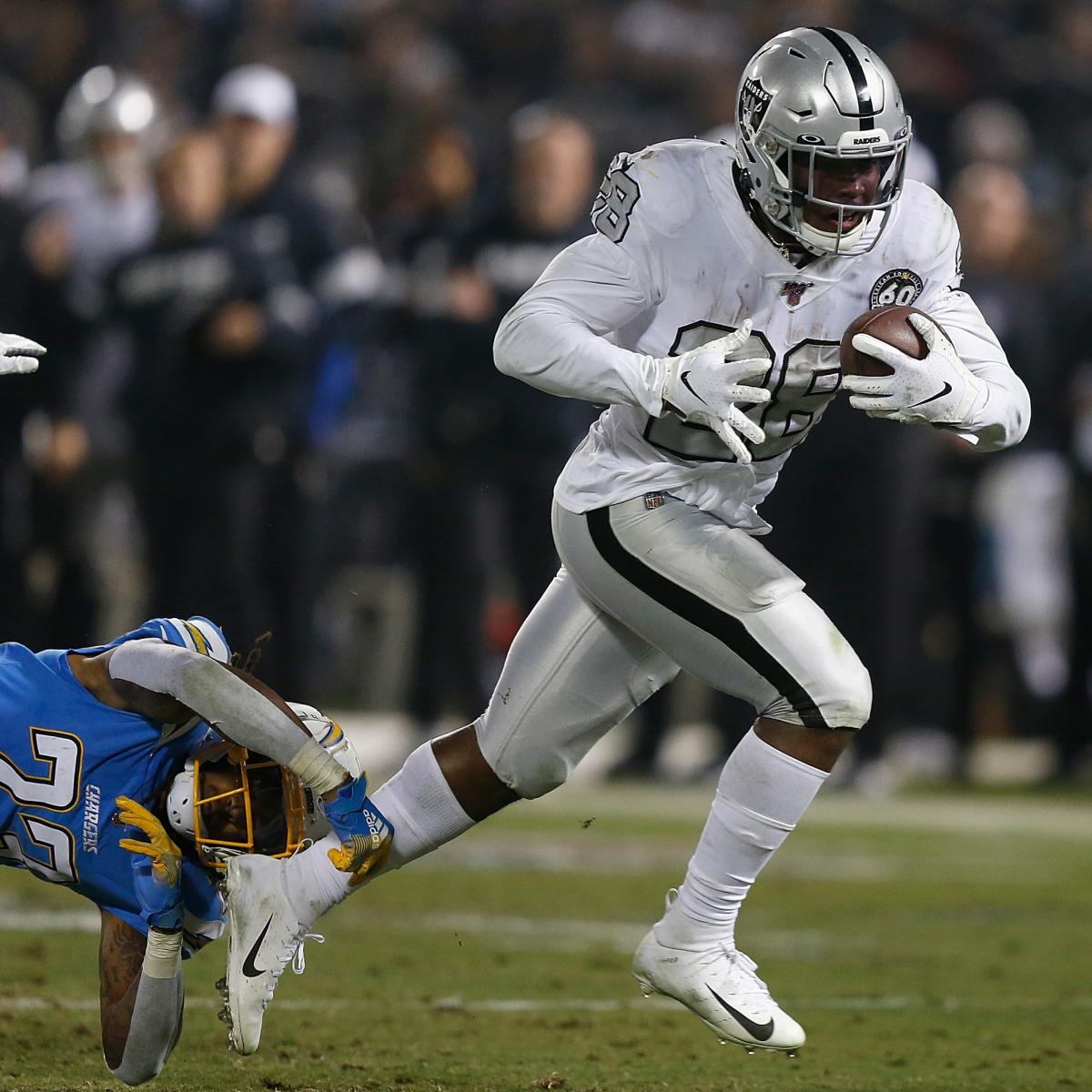 The best of the best want the ball in their hands during critical moments. They don't shy away from the limelight or shrink when they're needed the most.

And when everyone on the field knows they're getting the ball, it becomes a battle of wills to determine who will win.

With this in mind, running back Josh Jacobs showed Thursday he's a transcendent talent in leading the 5-4 Oakland Raiders to a 26-24 victory over the rival Los Angeles Chargers at RingCentral Coliseum.

Jacobs has already established himself as an elite NFL running back and the runaway favorite for Offensive Rookie of the Year through nine games.

His overall stats are important, but those will take a backseat for a moment.

Everything anyone needed to know about Jacobs and how he's viewed within the Raiders organization can be exacted from one play.

For the most part, the Chargers bottled up Jacobs. This year's 24th overall draft pick didn't perform particularly well through three-plus quarters of play. In fact, he had an unimpressive 1

3 carries for 43 yards before his all-important tote.

What a carry in crunch time, though.

Take note of the situation, time and down-and-distance. The trailing Raiders needed to convert a crucial third down. Jacobs did one better, making a house call.

Obviously, the offensive line deserves credit. The big boys up front did their job by opening a significant crease for Jacobs to exploit. With that said, the play represented a significant development.

The coaching staff's growing trust in Jacobs is evident. The Raiders needed one yard to extend the game. They didn't try to hide that they were going to run the ball by lining up in an I-formation. The coaches put the ball in their best player's hands, and he delivered.

Again, Oakland's offensive line blocked the play extremely well. The first potential tackler didn't get near Jacobs until four or five yards beyond the line of scrimmage. Kudos to left guard Richie Incognito and center Rodney Hudson for blowing open the hole by resetting the point of attack and getting to the second level on a well-executed ace block.

Any professional back should be able to hit a hole that is wide-open and get enough yards for the first down. The next step shows where Jacobs excels. According to Yahoo Sports' Brad Evans the rookie entered Thursday's contest as the league's leader in yards after contact per attempt and elusive rating.

On Jacobs' latest touchdown scamper, Chargers safety Rayshawn Jenkins had the angle to stop the running back for a relatively short gain. Instead, Jacobs gave the defensive back a little shimmy and cut between two defenders on his way to the end zone.

Therein lies the first-year back of greatest strength: Jacobs is a patient yet decisive runner. He picks and chooses his way through opposing defenses while finishing runs with authority. He's not easy to tackle, and he'll rarely provide defenders with a flush target.

Instead, he shows the ability to change speeds at a moment's notice. Jacobs can decelerate and accelerate as well as any running back in the league. He's not always playing at 100 miles per hour like many rookies who just try to hit the hole and get what's available. Jacobs already understands blocking concepts, setting up those blocks and allowing everything to form in front of him before he explodes through the available crease.

All of these traits were apparent during Jacobs' time at Alabama. But he's making a bigger impact because he's getting more opportunities. The Crimson Tide rarely used Jacobs as their starting back. He never carried the ball more than 20 times in a college game. In fact, he eclipsed 10 carries only seven times in three seasons.

Jacobs now averages 18.7 carries per game. After Oakland's Week 9 win against the Detroit Lions, he became the only back in the last seven years with two games of 25 or more carries and no negative runs, according to the Associated Press' Josh Dubow . He's always going forward and delivering blows instead of accepting them.

"That dude is incredible," tight end Darren Waller said last week, per NBC Bay Area's Scott Bair. "He runs the ball with such energy that you feel like you have to match that. We don't want to just see him make great plays. We want to make great plays with him and help him do what he does. We all take on that attitude and let him be featured because that dude is the real deal. "

His usage has led to outst and production. Jacobs already broke Marcus Allen's franchise rookie rushing record, and he's fourth in the league with 811 yards. He's also in the top five in carries (168) and rushing touchdowns (seven).

No other rookie back compares. Pro Football Focus graded Jacobs as the league's best back before the Chargers contest. He also entered Week 10 as the league's second-most effective runner against loaded boxes, according to the site. The Chicago Bears' David Montgomery ranks second among first-year runners with 406 rushing yards. No rookie is within 400 yards of Jacobs' total.