Male charged with murder, DUI in connection with the fiery crash on I-64 that killed LMPD officials | News 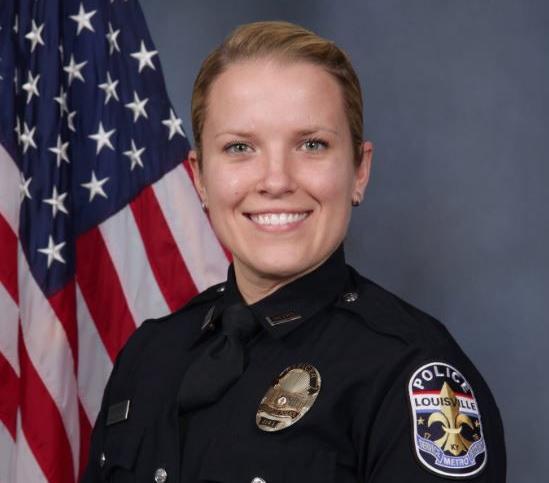 LOUISVILLE, Ky. (WDRB) – An MSD employee is charged with killing and DUI after a LMPD officer died in a fiery crash at I-64 in downtown Louisville on Christmas Eve.

that the accident occurred after 2:00 Monday under Belvedere, near Third Street, east of the I-64 road.

LMPD Police Chief Steve Conrad said that the second division Detective Deidre Mengedoht, 32, had taken his emergency lights while he was conducting traffic on a pickup truck with four people inside the right lane of I -64 East. That is when an MSD driver, identified as 60-year-old Roger Burdette, crashed into his cruiser, pushing it into another vehicle. The cruiser climbed into the fire with Mengedoht trapped inside. No one seriously injured the crash.

Chief Conrad said that the damage to the cruiser of Mengedoht was "catastrophe."

Burdette was arrested and charged with killing a police officer and DUI in connection with the crash.

Mengedoht, known by his friends and co-workers as DeeDee, left behind a young son, and had a force of more than seven years, according to Chief Conrad.

"DeeDee, known to his friends and colleagues, gave his life in community service, something he wanted to do," said Chief Conrad.

The MSD released a statement saying they were working with the LMPD, and "It was a tragic accident and our condolences came to the family of Detective Deidre Mengedoht, his fellow officers and the community." [19659002] Joel Schipper WDRB was at the scene of the crash, and was seen officially giving a field of burden to Burdett after a crash. He has been booked with Metro Corrections still wearing his MSD shirt.

The police only provided a tanker truck driver's field of sobriety test following a deadly accident at I-64 in downtown Louisville. @WDRBNews – Joel Schipper (@JSchipperWDRB) December 24, 2018

The Louisville Metro Police Foundation posted a message on its Facebook page which says "We are discouraged at the loss of our LMPD Officer killed at I-64 today. Please keep family blood and blue in your prayers. "

Several local officials shared their condolences on Twitter with friends and family officials, including the Kentucky Governor Matt Bevin.

President David James shared his condolences on Twitter, and released an additional statement saying, in part, "This official went to work today to patrol again on our streets and died doing an official sworn office, to protect our great city … Such an example should remind us all the dangers our official faces on the line of duty. "

prayer to our @ LMPD Family. Thank you for your service and sacrifice. pic.twitter.com/uzFLQLxVxa

we are distressed by the tragic death of Louisville Metro Police Detective Deidre Mengedoht. When Deidre joined the LMPD, he was committed to serving on behalf of our city, and his death was a painful reminder of the sacrifices made daily by public safety professionals. "At a time when many of us gathered in the family during the celebration of the holidays, it was a very sad day for our entire community. I encourage my fellow citizens to come with me to pray for Deidre's family, and his LMPD brothers. "

My heart is now in anguish as we grieve the deadly death of @ LMPD Detective Deidre Mengedoht. Deidre joined the LMPD, entrusting himself to serving in the name of our city, and his death was a painful reminder of the sacrifices our public safety professionals perform daily.

I-64 reopened at 11 pm, after nearly nine hours

An escort of the ambulance police carrying the Mengehodt left the scene of the crash after 19:00, according to Joel Schipper of WDRB. ] Police escort to I-64E as ambulance carrying the body of @ lmpd official leaf fatal crash scene. @WDRBNews #Louisville #ServeandProtect pic.twitter.com/ZVXsGtiXAx

came out of his mother, his father, his son, and his family and friends and colleagues in this department, "said Chief Conrad.

The LMPD Division of Public Integrity Unit and Traffic Division are investigating the crash.

This is a story progress and will be updated as more information is available.