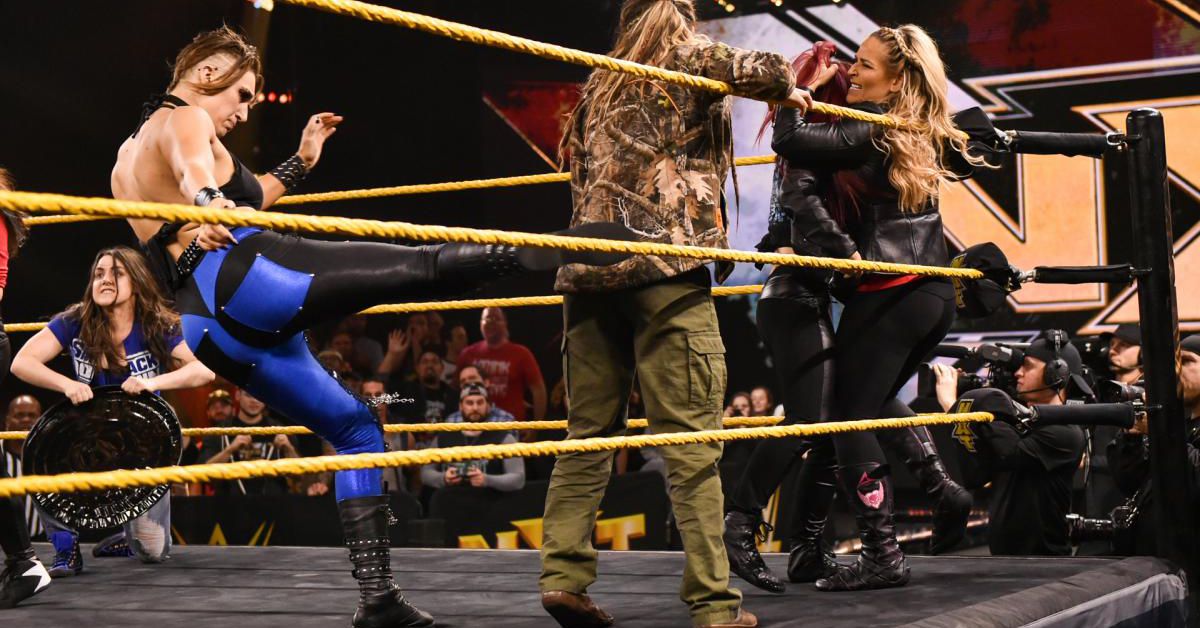 NXT returned to us last night (Nov. 20) from Full Sail University in Winter Park, Florida. You can find the results on the live blog here.

Many of the Same

Becky Lynch returns to NXT, and that is a big moment.

Becky did not reach the pinnacle on NXT. She didn't win the Women's title. The closest thing was getting Sasha Banks to the limit and getting the audience's love in the process. This is something that Man remembers as he brings it to his promo.

Lynch is a great promo. The crowd challenged him several times but he leaned on it, as they chanted "Shayna will kill you" and returned it to his side. It wasn't news, but I remembered every time he took me to his prom, and that was always the case.

His challenge against Baszler was actually accepted by Rhea Ripley and the two had a pretty good match. Unfortunately, this was interrupted by the very unpredictable Baszler & Co's run. This Survivor Series act was killed by matches that were delayed. We lost the ending to a great New Day vs. Change in SmackDown because of this. In Raw both Andrade vs. Seth Rollins and Kevin Owens vs. Drew McIntyre fell ill with the same fate. It's creatively lazy and it runs on NXT.

But to book this Survivor Series build has been sluggish. That is not usually an issue in NXT, but it was a theme throughout the night with brawls.

Following the close of the Becky / Rhea match, we got a Ricochet and Matt Riddle featured. .. guess what! … interference!

Because it was right after the opener, seeing the same thing happening demanded an eye roll from me. Riddle picked up a win amid the chaos so they wouldn't have two non-consecutive wins. But it is otherwise the same.

Cesaro and Shinsuke Nakamura were involved and the brawl itself was not bad. Ricochet dove from the top rope to the floor is wonderful as hell. And this led to a moment between Finn Bálor and the riddle that helped tease what they could do in TakeOver on Saturday.

In a vacuum, it's all going well in some cool moments. But this is the second of two segments with disruption that shifts away from what might be a good match, leading to the feeling that NXT has lost control of their mess.

The Revival vs. Undisputed ERA is undoubtedly the biggest draw for tonight's episode for many people.

There was always a risk that a match might not be as expected, but both teams clicked. It's strange to see Dash Wilder playing a peril when he is normally on the other end of that role. But someone and ERA were allowed to do their thing.

(One of the great things about these two teams and they make the extended face in the safety section entertaining is because their offense is believable, whether it's the jui-jitsu background of Kyle O & # 39; Reilly or the smash mouth offense of Salvation.)

Scott Dawson is later the hot tag, which is not unusual at all. He played it cerebral, never deviating from his style. Dawson didn't fly around the ring, throwing his body at the opponent. He avoids a move and delivers a big hit. His extensive knowledge of the tag team wrestling team was his greatest strength and he used it. Finally, Fish and O & # 39; Reilly have positioned themselves to hinder Dash Wilder from saving Dawson from a high ERA. Dawson went on his own terms by saying "screw you" after finding out he was gone. they are the winner. It's like two great generals trying to drive each other until they put themselves in a position of guaranteed success. And a game student like Dawson knew it was over.

Hope to make them again someday. No need to get too close. Maybe it would be better if it wasn't. But another chapter that goes down the line is welcome.

The main event was the men's ladder between Adam Cole (bay bay) and Dominik Dijakovic to decide who could win the WarGames.

It was clear that Adam Cole was going to win, which he did. Heels always get the advantage over WarGames. The game didn't slot as much time into the ladies ladder as last week. And it's not good (though last week's match was awesome). But it's still fun.

These two men put up a fun fight during their time together. And there was no interruption during the match, which was nice.

Of course, after the match was a Pier 6 brawl.

That's right, another show that ends in a big mess. It happened on Monday. Probably will happen on Friday. We are heavy on reruns here.

However, there are still moments. Keith Lee stares at Drew McIntyre. Lee and Ivar of the Viking Raiders dive into a sea of ​​bodies onto the floor. But it was the end of the moment.

Seth Rollins appeared and stood tall in the NXT ring. Everyone is downstairs. With Daddy Ciampa coming out. He strolls through the sea of ​​bodies (a great image) and enters the ring before he surrenders to kick Adam Cole in the head. Worrying he still hates Adam Cole throughout the brand war is a good thing. Then he and the first NXT champion came face-to-face before dumping haymakers as the show faded into black. 19659033] Kay Lee Ray defeats Dakota Kai on one side after Kay Lee sacked Kai last week and helped Io Shirai win the ladder match.

It was a great match, but I'm still disappointed that we don't have an explanation for why Kay Lee, who has never been to the NXT prime, joined Shayna's team. Either Shayna or Kay Lee should have told us. They do not and his addition plays at random.

It also finished with a Raw & SmackDown style brawl. There was a great moment where Down's Kairi Sane and NXT's Io Shirai, who used to be fast friends when they were both really blue babyfaces, started each other. But on the outside, this is a standard brawl. The Raiders won, which should come as no surprise, but the Sons have a very good showing.

NXT critiques the trial to balance their own WarGames story with the Survivor Series set up this week. It’s too much about random attacks and intrusions, and much like Raw this week in that sense.

NXT did a great job of focusing on their own stories with an explosion of interbrand war until this week, but it was out of hand. It felt like they were developing the Survivor Series with a little bit of WarGames here and there. This should be the opposite as WarGames is their big show this week.

There was still something very good about this show. Undisputed versus Return (seriously, watch it if you haven't). The ladder match. The showdown closes. But I look forward to when this attack is over and they will return to doing their own thing.