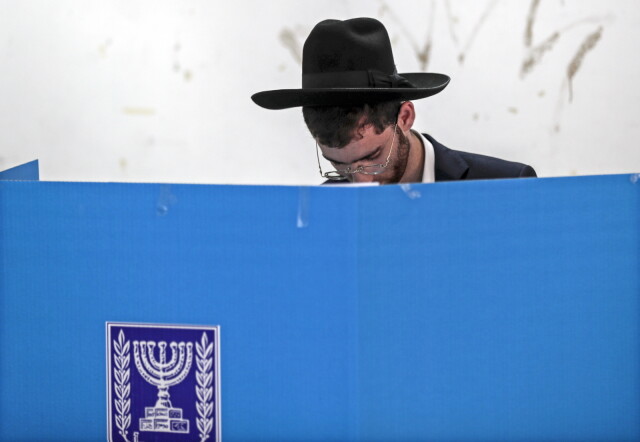 Repeated parliamentary elections in Israel are over. According to the exit poll, the blue-and-white opposition center block from Benny Ganca and right-wing Likud prime minister Benjamin Netanyahu got a comparable number of votes. Both groups will have trouble creating a coalition majority in the Knesset. The future of the current head of the Israeli government, with corruption charges, is also in question.

The Blue and White Coalition won 34 seats, and Following 33 seats in 120-person Knesset – according to an exit poll survey for Israeli television. This means it will take days or weeks before a candidate for prime minister is selected – writes Reuters.

Pre-election polls do not guarantee the creation of a large coalition (61 out of 120 seats) in the Knesset or the right-hand bloc on Prime Minister Benjamin Netanyahu, or the left-wing bloc headed by former Chief of Staff Benny Ganc.

The result of Tuesday's election was almost a repeat of the April vote, when both parties won 35 seats.

The opening of the place at 7am (6 in Poland). Voting lasted up to 22 (21 in Poland). 6.4 million people are eligible to vote. At 20 local time (19:00 in Poland), election turnout was 63.7 percent. and 2.4 percentage points higher than the April parliamentary election in Israel – the daily Haarec reported.

The security of nearly 11,000 polling stations in the country and its territories is monitored by 18,000 police, bodyguards and volunteers.

Voting again due to deadlock

Tuesday's vote was due to deadlock following the previous April election. Netanyahu failed to form a large coalition after them and after the deadline for forming a government the parliament was forced to dissolve itself.

The results of the Likud Netanyahu and the Blue and White will be crucial for the post-election situation, as it depends on which leader received the first mission to form a government and fights for the support of potential allies . In total, politicians from the 31 lists applied for 120 seats.

The result of Tuesday's elections means that the future of the head of government is in question – a Reuters agency said. Above Netanyahu is a threat of three trials in cases of corruption, abuse of trust and bankruptcy.

As the AP agency emphasized, "a certain victory in Tuesday's vote could save him from court (…) On the other hand, repeat the deadlock after the April election or win The Ganca means ending the career of "Netanyahu, who ruled Israel for 13 years," the agency added.

Play: Repeated elections and repeated results.
Exit poll: Netanyahu and the opposition are about to tie

Israel's repeated parliamentary elections are over. According to the exit poll, the opposition center block …
read more »

Play: The Spaniards are coming again in elections

After the April elections in Spain and the long months of negotiations, Prime Minister Pedro Sanchez failed …
read more »

Play: Olbrycht as deputy of the EPP team in the European Parliament. "This is our long-term strategy"

the first round of presidential elections in Tunisia settled. Conservatives will fight for the highest office in the country …
read more »

On Tuesday, the Polish government sent the European Commission a related hearing for EU law violations in the case …
read more »

The European Commission investigates the tax breaks provided by Belgium to 39 companies. It's about interpretations …
read more »
yesterday, 18:03

Belarus and USA have decided to return ambassadors to their diplomatic missions. The deputy announced this …
read more »

Play: A woman with a transplanted birth gives birth to a child. "This is the first historical case"

Authorities found a Dutch citizen missing Sunday in the Spanish province of Alicante. So, the victims' balance …
read more »