"Moscow is back on attempts to influence the international order by force." She is calling for him to stop lying! 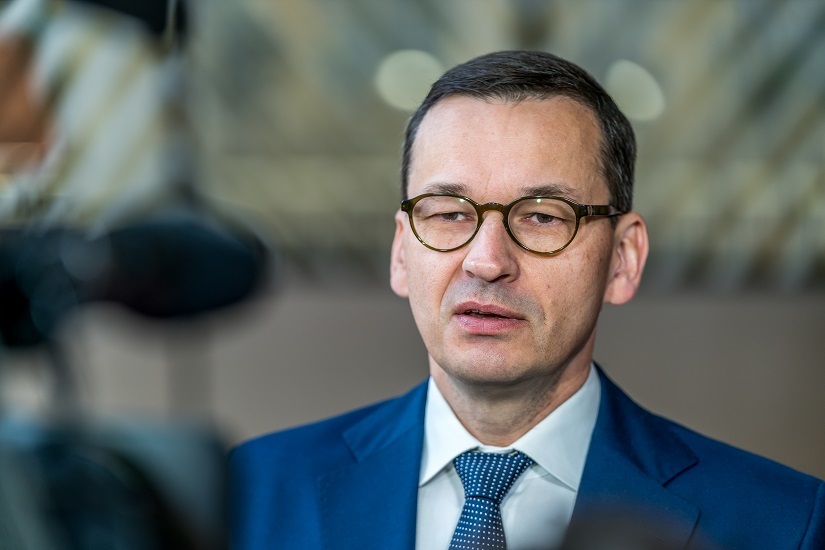 Prime Minister Mateusz Morawiecki appealed to Russia on Tuesday to abandon attempts to thwart history and aggressive policy toward neighbors. The head of government wrote about it in a letter addressed to participants of the 80th anniversary of the outbreak of World War II in Kuty, Ukraine.

READ ALSO: Monuments in front of the Monument to the Fall and Killed in the East. President: "We have a duty to remember our ancestors"

7, 1939, led by the President of the Republic of Poland Ignacy Mościcki, Prime Minister Felicjan Sławoj Składkowski, commander-in-chief Marshal Edward Rydz-Śmigły and Minister of Foreign Affairs Józef Beck in Romania to many refugees in Romania.

on a special day, we urge the authorities of the Russian Federation to abandon attempts to disrupt the history and aggressive policy of the neighbors. We call for the continuation of genuine and constructive cooperation with the international community so that tragic history is just one memory

– Morawiecki wrote in a letter read by the Center for East European Studies director at the University of Warsaw Jan Malicki .

In a letter to the participants of the festival, the Prime Minister said that the last few weeks continue to remind us of the worst moments in recent Polish History.

Many bitter words have been said about the aggressive policy of the Third Reich and the Soviet Union, inevitably leading to a confrontation; first in Poland, and finally for a bloody confrontation between the two regimes. At the same time, the victims of their actions almost from the early days of World War II were all countries that were part of the Second Republic of Poland

According to Morawiecki, after the USSR invasion of Poland, Kuty became a symbolic place.

Here, the last meeting of the government of the Second Poland Republic took place 80 years ago. Here, in the local Catholic church, the last Polish mass for the homeland was held with the participation of the highest authorities of the Republic of Poland: the president, prime minister, head of state, minister of foreign affairs and other personalities

Prime Minister Morawiecki noted that today's anniversary "forces us to reconsider the effects of irresponsible politics, conducted in the name of individuals' interests, in the name of false ideologies, and often common." desire for some revenge in history. "

He estimates that the current attempt by the Russians to revive the September 17, 1939 invasion and silence over the long, tragic consequences was. it was nothing more than an attempt to falsify history and defend the policy of Joseph Stalin, whose purpose was to dominate the Soviet empire. He violated the principles of international law, the right to self-determination of nations, and respect for the sovereignty, independence and integrity of the territories of the states

This is particularly seen here in Ukraine. It is Ukraine that has been victimized by the illegal invasion of Crimea and the city of Sevastopol, followed by armed invasion of Luhansk territory and conflicts in Donetsk. Fighting in Donbass consumed more than 13,000. of human life

At the same time, Morawiecki called on the international community for solidarity with victims of crime and "Russia's current imperial policy." Kutach, who was at the Holy Mass 80 years ago "for the first time in over 20 years, the words:" Father, let us return free, Lord. "

After 20 years of independence, when the Poles could sing "Bless the Motherland, Lord," the day that crossed our freedom

Kasprzyk noted that "the war began three weeks before the German invasion. but the Soviets, struck in a counterattack with a knife, a knife and a rear-end blade, seized the opportunity for carrying out an effective, further protest against it. "None of the representatives of the Polish authorities were captured: either German or Soviet. They were allowed to continue fighting the French ally, after Great Britain

On Tuesday, after a mass massacre. Roman Catholic church in Kuty, a plaque was shown to commemorate the events of 80 years ago.

Before traveling to Romania at the presbytery of the Greek Greek church in Kuty was hosting the last Polish government meeting Republic with the president, and in the church The Sacred Heart of Jesus celebrated the last mass in the Republic of Poland with the participation of representatives of the then state authorities.

On September 17, 1939, the Red Army entered in the territory of the Republic of Poland, which violated the Polish-Soviet faction for not invading and implementing the arrangements contained in the secret protocol of Ribbentrop pact Molotov. g alliance of two totalitarianism resulted in partition of Poland.

As a result of the partition of Poland, the USSR acquired an area of ​​more than 190,000. sq km with a population of about 13 million In October 1939, the truncated region of Vilnius was solemnly transmitted to Lithuania in October 1939. It was not long, however, since June 1940 Lithuania, with Latvia and Estonia joined the USSR. The number of victims among Polish citizens under Soviet occupation in 1939-1941 is not fully known to this day.

Prof. Andrzej Paczkowski, referring to this issue in the book "The Black Book of Communism. Crimes, terrorism, persecution", wrote:

It is believed that for less than two years Soviet power in the lands brought to Poland, they were attacked in different forms – from shooting, through prisons, camps and exile, to forced labor – over 1 million people (…). At least 30,000 people were shot, and the death toll between plaintiffs and deportees was estimated at 8-10%, possibly 90-100,000 people.