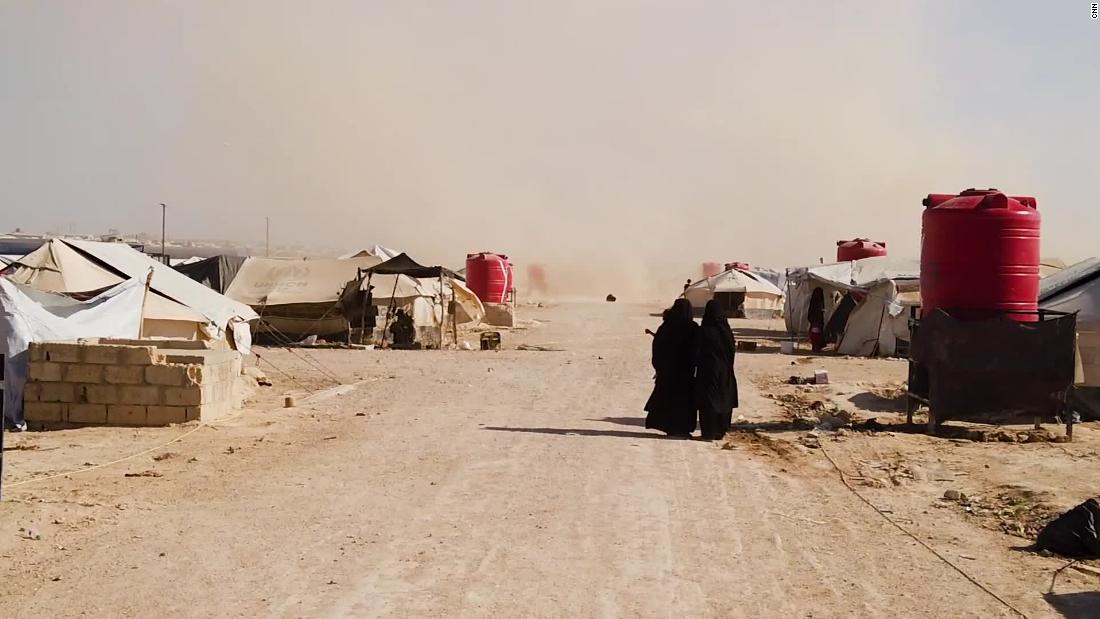 A CNN team approaches an Iraqi women's group. Our request to talk to them speaks of debate. "Brothers, don't say anything," one woman warned the rest of the group.

"No, brother, we have the right to speak," another retorts.

They talk to one another, pouring out a litany of grievances. Kids start stealing. They have no money. Conditions are hurting. They wanted to go home.

About 15% of its residents are foreigners, but the international community has for some months abandoned the camp. And as living conditions deteriorate, nostalgia for ISIS policy begins to cook.

The camp's population has fallen from 9,000 to 70,000 after ISIS made its last stand in the Syrian town of Baghouz in March. The weeks of the war have led to a large influx of displaced people, most of them families of ISIS fighters.

Around 50,000 of those living in the camp are children, and most of them are women. They were the people who were held in the swift recession of the so-called caliphate.

And while some of the mothers have tried hard to find a way out of the camp, many have tried to revive their fundamentalist utopia.

"We are beginning to notice that new arrivals are very well organized," said Mahmoud Karo, who manages the camps in the northeast of the Jazira district of Syria. "They organize their own police morally. They are organized."

Under a cloak of secrecy, radical women living continued to enforce the draconian laws of the so-called caliphate.

The police on women's allegiance to ISIS, punishes those suspected of wavering in their support for the extremist group.

" The camp is the best place to build the new ISIS. There is a resurgence of ISIS indoctrination, "says Karo." You cannot differentiate between who is ISIS and who is not. "

Tracking offenders is difficult, she says. at the niqab, it is almost impossible to identify them constantly changing tents to prevent capture.

A Pentagon report by the inspector general, released last month, warned the US and its local allies does not strictly monitor movements within al-Hol. A seizure of US military presence in the area has allowed "ISIS ideology to spread & # 39; no mention & # 39; in the camp, "the report found.

The growth of al-Hol extremism runs in tandem with the signs of ISIS's resurgence elsewhere in the region.

ISIS attacks in the north- western Iraq, where the group was once the leader of large territorial swathes, is becoming more frequent, and the group has claimed responsibility for other attacks in the region in recent months.

U.S. Secretary of State Mike Pompeo acknowledged the trend, saying last month that there are "places where ISIS is more powerful today than it was three or four years ago."

Kurdish camp officials described al-Hol as an "ISIS academic." The area is a toxic mixture of the ideological aspirations of ISIS and those who want to abandon their past.

The lack of international involvement and neglect has allowed extremism to flourish, camp officials say.

Around 10,000 people in the camp are foreign nationals from elsewhere in Asia, Africa, Europe and North America. Very few have been repatriated. Returning them to their home countries is not a political thing popular in Europe and abroad.

Women in the camp market say their most important priority is the removal of their estranged wives and teenage children held by the Syrian Democratic Forces.

"I tell my children that their father is among the infidels," a woman told CNN.

Another woman claims she does not know what happened to her detained teenage son. The situation pushed him to the brink of madness.

"If men were not released, women would be the largest cells," he said.

After fleeing Deir Ezzor for al-Hol with his wife and children three years ago, Abdel Qader Mohammed opened a barber shop in a small cement-and-brick room in the camp.

One of the first settlers in the camp, Mohammed came before the influx of people who had remained in ISIS while the group last stood. He was one of the few men in the area – and the only person we met who was willing to speak out against ISIS.

"I came here to escape ISIS and am now in a camp full of ISIS," he said. "We can't talk to ISIS people here. Even though [as] we were cutting hair, they started telling us we were infidels."

In one of the tents, a woman said she was desperate to get out of al -The annoying environment. But there was no rehabilitation program for the people in the camp, and no effort was made to isolate extremists from those who opposed ISIS.

A Telegram chat group has killed al-Hol's "death camp" as a scream for ISIS. In Arabic, English, French and Turkish, they detail what they call "atrocities" committed by "Islamic swine opponents" and call on "lions" – a reference to extremist fighters – in northeast Syria to “wake up.”

In July, a woman calling herself Umm Bakr al-Ansariya issued a well-publicized fatwa, an Islamic order, demanding that Muslim workers wear the Niqab , and threatened those who disobeyed the order with “punishment by the sword.”

That same month, a video posted on social media showed the black ISIS flag being raised in the Syrian section of the camp.

"This is a reaction to the psychological pressure on us," a woman living in the Syrian section of the camp explained. "They need to know that there is more that can be done than raising a flag."

In the aliens section of the camp, a little girl with a blond ponytail zips around a playground on a toy scooter. He plays with other kids, a mix of Europeans, Asians and Africans.

"Are you afraid of us?" asked a 23-year-old German woman.

"I was just asking," he said, wondering why his country would never return him. He said he no longer wants to live by the rules of the so-called caliphate.

Residents say they live in fear of the camp. ISIS vigilantes. Another woman tells us her tent was on fire. His friend said he was so afraid of being stabbed that he could hardly sleep.

One foreign woman cleared her niece for removing her niqab, while another was beaten for cleaning in front of her tent without a niqab, Karo said.

Captives of the Caliphate

Outside the camp, a predominantly Kurdish-controlled prison, US-supported Syrian Democratic Forces (SDF) offer a unique perspective. models. Around a dozen of them kneel at a long table, creating a miniature football stadium, houses, cars, animals and flowers.

The walls are lined with other creations: a town model with twinkling lights, a mosque, a church.

"We do it from nature," detainee Ali Othman said with a shrug. "Can you help us?"

Othman claimed that ISIS held his family hostage at Raqqa, the former seat of their power, and forced him to join their ranks. He was responsible for planting bombs in other cities.

One day, he received a plastic bag that exploded, grabbed his right hand. She wears it with a glove these days. He served 20 years, the highest sentence.

There is no death penalty here and prisoners can get early release for good behavior – unlike the authorities in Damascus and Baghdad, Kurdish forces are banking on mediocrity.

They are also trying to separate extremist prisoners from those who appear to have parted ways with their pasts – a policy that does not apply to al-Hol.

Some of the detainees say they were detained. Others said they were innocent but family members admitted they were members of ISIS. Some, like Othman, admit to joining but claim they have little choice. sentences or identified as having radical tendencies.

"Abdullah," 15, said he joined ISIS when he was 12 years old. We call him Abdullah to protect his identity. This is not his real name. He trained for months before being sent on his first mission: to plant explosives at a US base.

"They brought us sticky bombs to put under the fuel tanks of vehicles," he recalled. "We got suicides of vests and weapons. We put on vests and took our weapons off and then wore women's niqabs to hide everything."

The operation failed and he ended up in prison. Later, he was transferred to a rehab center. "I was able to distance myself. It was a mistake. I learned from it," he said.

Other children show visible signs of trauma. One boy, "Hassan," was the son of an ISIS emissary who had previously beheaded and handed Hassan the head for use as soccer balls. Hassan is not his real name, but the one we use to protect his identity.

In the rehab center, "Hassan" is a recluse; he did not want to be interviewed.

The director of the center, Musab Mohammed Khalaf, did not know if he would actually recover.

The rehab center is trying to provide basic psychological support to help Hassan and others recover. But resources are limited, and trauma is more than imaginable. It's anyone's guess how much ISIS indoctrination can take away from a teen's mind.

"If the situation stays this way and the countries can't help it, ISIS will return," Khalaf warned. "We hear about it, the cells of the sleeping, they are taking advantage of the children, they are trying to recruit them." It stands as a legacy of yesterday's war.

And that is what makes it truly dangerous, because if allowed to fester, this encampment contains the seeds of the next war, of ISIS's revenge generation.

This story has been updated, and the name of the rehab center has been corrected.