World of Warcraft: Shadowlands impressions: Leveling alts is about to get a lot more fun 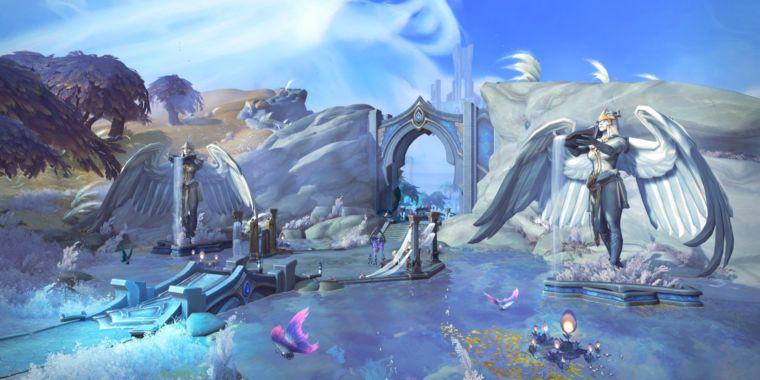 World of Warcraft: Shadowlands marks the eighth major expansion pack for the storied MMO. Judging from a half-hour playing it at BlizzCon this year, it seems like a natural evolution of modern WoW that will run alongside the very-different WoW Classic experience for the foreseeable future. That said, the biggest change wasn't part of my hands-on demo — but don't worry, that won't stop me from geeking out about it in extreme detail.

Let's be clear where I'm coming from, here: I've been playing World of Warcraft almost continuously for 1

5 years. (I lapsed for a big chunk of the Wrath of the Lich King era for IRL reasons.) While I understand the appeal of the WoW Classic I am very much a proponent of modern WoW ; the game has evolved over time to be more accessible for me to play just a couple of hours a week, as real life now dictates. But I tend to play solo or just with one or two friends on a sporadic basis, which means I'm looking for something very different than the hardcore raiding or PvP crowd.

Within that framing, I feel WoW has gotten more and more fun over the years. There have been some missteps, sure (I'm looking at you, Warlords of Draenor ) but I felt that the semi-recent Legion was the best expansion Blizzard has ever done. My hopes are high for Shadowlands .

It's hard to get a sense of an entire World of Warcraft expansion from 30 minutes of play. In my short demo, I recreated my main (a Beast Mastery Hunter) and played through the introductory quests from the Bastion zone, a heaven-like plane from Azeroth's afterlife. The minute-to-minute gameplay very much followed the formula of modern WoW questing, with a variety of tasks like challenging specific enemies to duels, helping craft things in timed minigames, and of course, killing 10 rats ( well, not rats, but they might as well be.)

From what I could tell, not much had changed about my character's build; my DPS rotation was the same as it is in Battle for Azeroth . But we're a year out from launch, and past expansions have taught us that plenty of that small stuff can and will change in the coming months.

As always though, Blizzard really delivered on the art front. Bastion is striking, with big, beautiful skies, banners realistically waving in the wind, and fascinating characters like a humanoid, owl-like race that inhabits the zone. Blizzard artists told me that they plan to support RTX raytracing, as well as new kinds of real-time lighting, in the expansion. I'm surprised by how good modern WoW looks on a high-end PC these days, given that it originally came out in 2004, and it looks like that work will continue.

Since this was an early questing experience and not an endgame one, I didn't get much sense of how Covenants— Shadowlands's new Order Hall, Garrison, or War Campaign-like systems — work. Neither did I have much time to dive into the story, though I saw enough to know that, if you like the flavor of the recent WoW expansions, you'll probably like this one, too. (I for one am glad we're going to get a brief respite from the Alliance vs. Horde war storyline.)

But the most interesting thing Blizzard is changing wasn't part of my demo.

Taking it to a new (well, old) level

Frankly, the aspect of Shadowlands I'm most excited about is an overhaul of the leveling system — something that wasn't a part of this demo in a major way. This kind of breaks the rules of a hands-on article, but I want to take an opportunity to talk about it and why I think it's interesting regardless since it came up in my interview with WoW developers. [19659002] After rumors about this possibility for the last several expansions, Blizzard has finally followed through on a crunch level. Whereas characters in the current Battle for Azeroth expansion cap out at level 120, the cap in Shadowlands will be 60 — just as it was when the game first launched and just as it is in World of Warcraft Classic . Level-120 characters will be scaled down to level 50 when Shadowlands launches.

That might seem odd or negative to those who aren't currently playing WoW but it's actually something a great number of today's WoW players have been asking for. As the levels rose in this 15-year old game that frankly wasn't designed with a 15-year plan in mind, Blizzard encountered all sorts of frustrating game design problems that players have been cranky about too. The WoW team has already crunched player stats like health and goes down on multiple occasions as a way to postpone fully solving the problem, so this is the culmination of something that's been underway for a few years now. [19659002] And few things were more problematic from a design perspective than the experience of leveling a new character up from level one. A level-based MMO this late in life seems to have three options:

Blizzard's new solution in Shadowlands is to return the level cap to its original value of 60 and to make current content appropriate for levels 50 through 60. New players start at level one, and they all play through a new introductory zone built for Shadowlands based on the quest design lessons Blizzard has learned over the years. Once they play through that introductory experience, they can then level up to 50 to catch up with current content by playing through the previous expansion ( Battle for Azeroth ) right away (from around level 10).

This skips all the content before the previous expansion to give players the most modern experience from a quest design POV (and to make sure the players are connected with the current storylines). It also ensures new players have a shorter leveling ramp — Blizzard says it will be as much as 70% shorter than it is currently to get from level one to the cap.

But it gets even more interesting when you look at how it will work for alts (second or later characters made by existing players). New characters by existing players will have the option of leveling up the old way in all the same old zones from the start. But they will also be able to go through the new-player starting experience if that's what players prefer.

Further, once the new character has completed the starting zone, the player can then choose to level up to 50 in any previous expansion of their choice — vanilla / classic, The Burning Crusade Wrath of the Lich King Cataclysm Mists of Pandaria Warlords of Draenor or Legion . The expansion's content will scale perfectly with the character level, and each is tuned so that reaching level 50 involves playing through the content at a similar pace to a similar level of completion as those expansions offered when they were current content.

So, I could create a Mechagnome Hunter, play through whichever starting area I want, and then pick either Mists of Pandaria or Legion as my leveling expansion for that character. Once I finished leveling through that expansion, I'd be ready for current content.

Blizzard hasn't talked about what it plans to do after Shadowlands . I speculate that the longterm solution would be to do this every expansion — so in the next expansion, Blizzard might move Battle for Azeroth into the multitude of choices for new character-leveling experiences and push level-cap characters back down to 50 to start whatever expansion comes after Shadowlands —an odd hybrid of traditional MMO and a seasonal model common in plenty of modern multiplayer games.

The result is that leveling up new characters will be a lot more fun, and it will be easier than it has been in years for new players to pick up the game.

A new expansion is exciting, but WoW 's strength is arguably in its history — and revisiting that history is about to get a lot more fun. More than new zones, raids, or endgame-progressions systems, this is what has me excited to play WoW when Shadowlands launches late next year.